I have an idea for the cover picture of this our first book to be published, Story Without Words.  I have realized that to me my simple art style is whimsical, and as my friend describes what I am doing, these are action figures.  Sadly, the action that will be portrayed in this book is most unpleasant.  But to begin with, here are some pictures of the making of this first completed cover artwork piece – the bed. 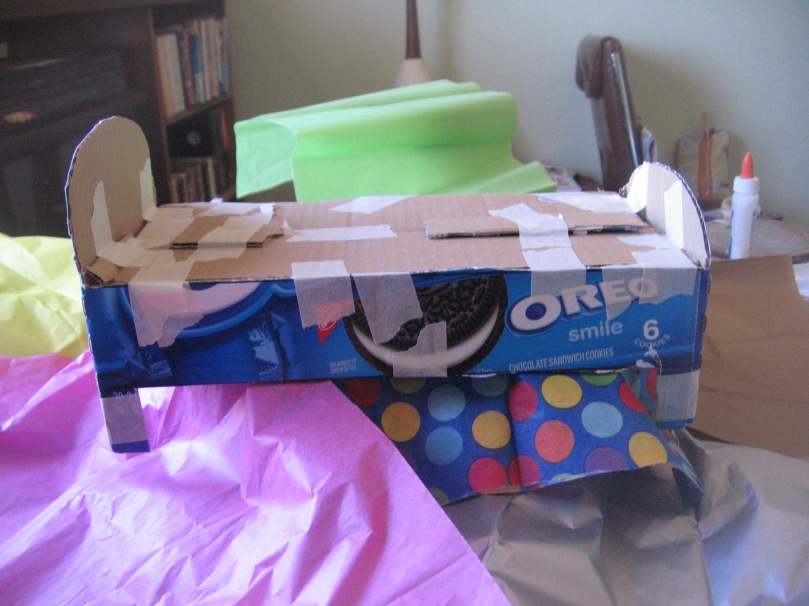 Mattress made of wadded newspaper stuffed into a plastic grocery bag, all wrapped with masking tape…. 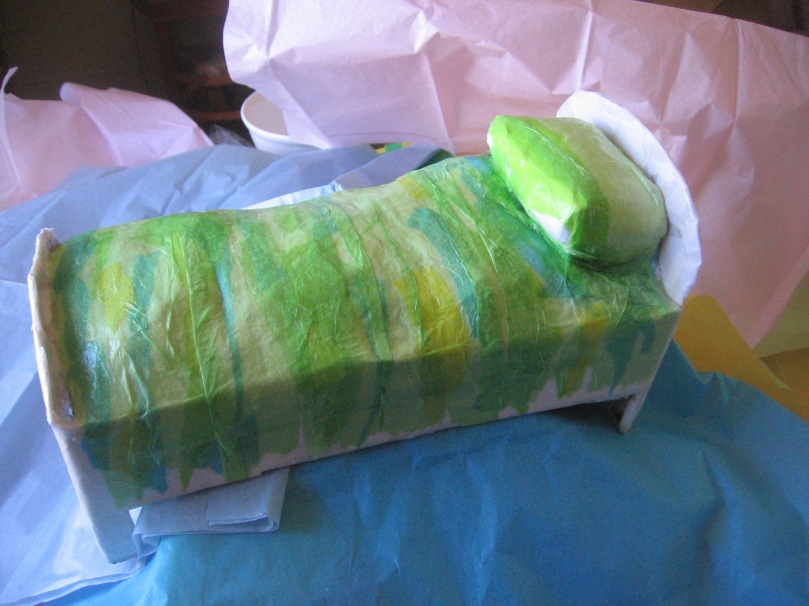 And here is the whimsical child’s bed…. 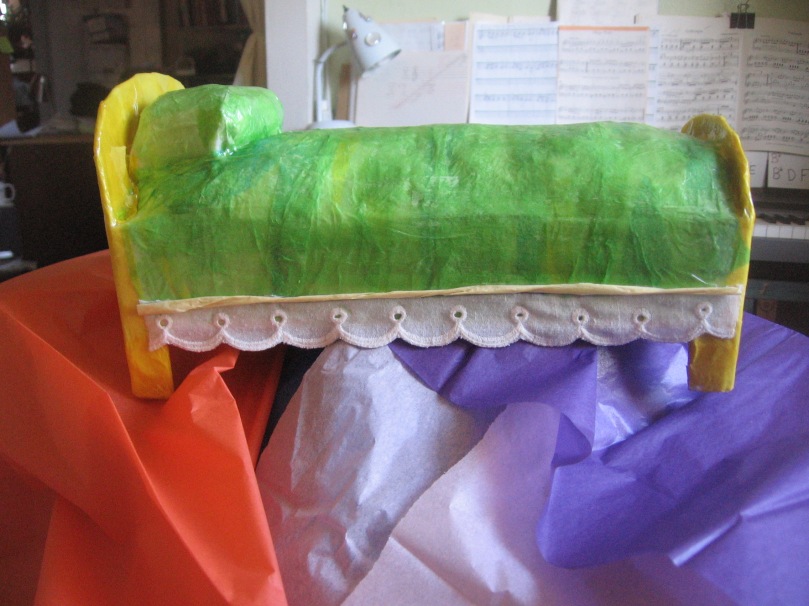 My thoughts for the background scene for the cover picture include a visual presentation of something I know well from my abusive childhood:  The environment that belonged to me as a child was a world that should have been safe and secure for me, but was not.  Every time my mother (my abuser) split off into her dark psychotic world within which I as her all-bad child was the sole occupant, when she interrupted my ongoing child life of being my own self with her abuse, another reality was created that I was forced to endure.

This reality is going to be portrayed symbolically in the scene for the cover of this book, Story Without Words.  But specifically to this book is the reality that patterns of abuse Mother perpetrated against me were perpetrated against her by her mother.  This is an intergenerational portrayal of what happened to Mother when she was a child as I believe that abuse directly changed her into the abusive monster she became toward me.

This will not be a pretty picture in the bigness of it all.  It will not be an easy one to look at.  I don’t believe personally that there is any other way for the scene I am creating to be illustrated in anything like a tolerable way other than the way I intend to do this.  Nobody wants to SEE child abuse in action.  We cannot tolerate its imagery.  I believe part of the way our society excludes not only very real awareness of the reality of child abuse but also avoids facing its reality head-on happens in part because we will not even begin to let the imagery of its reality into our mind.  How are we going to solve the problems that create and sustain infant and child abuse if we cannot even visualize it — or — THINK about it?

It has struck me during these days I am taking my break from writing for the 10th book in this combined series that MANY people were hurt in their earliest years by violence and abuse.  MANY people!  Not just a few!  The entire topic of child abuse then becomes personal perhaps to nearly the majority of people who are intent upon denying how what was done to them hurt them.  Denial is NOT helpful!

There are 3.3 million confirmed cases per year of child abuse and neglect in the U.S.  1,825 confirmed cases per day!  This says NOTHING about the stories that are not being given words — the silent and hidden cases of unreported infant and child abuse and neglect.  This book and its provocative cover image will address the invisible silence of one intergenerational story of abuse that is finally finding words for its telling.

My hope is that the primitive, simple and whimsical cover of this book — and the book itself — will help us all to address what is perhaps the darkest side of human nature as it conveys a message of hope that resolution of the problems that create infant-child abuse and neglect IS possible!