I am sorry I have not written you a letter before now.

Before school was out, our class gave a play before the whole school.  The name of it was “Snow White and the Seven Dwarfs.”  The words were said in rythum of a beat, clapped out by clappers.  They liked it so much that they wanted us to perform it before the P.T.A. on the 14th of May.  We did it, and they liked it, too.  The play has a catchey rythum and I am sick of it.  I don’t think that I will ever forget it.

[Linda note:  This makes me chuckle!!  I have retained this ‘clapping’ as one of the best memories of my life.  I was in 6th grade in the new Eagle River Elementary School.  I don’t remember the play, but I remember being in a large circle with all my classmates in our room as we learned and practiced the ‘click-clack’ beat.  We all had rhythm sticks for each of our hands that were carved with grooves in them so that they could both keep a beat by hitting them together, and another sound when we rubbed them.  We had dance steps that went with the clapping so that we moved the whole circle, turned around individually, all the while hitting the sticks in a complicated rhythm – and we could do it without missing a beat!  I would LOVE to have a group and do this again!  Interesting, obviously at the time I was SICK of that rhythm!  I am SO glad that mother let me participate!]

Thank-you for the last letter.  I liked it and the stamps, cards, and the pictures very much.

In that letter you asked if I was collecting only stamps of the U.S.A.  The stamp album I have is a world wide book.  It has all the countries in the world in it.  I use every stamp.  If I already have that stamp I trade it for a stamp I don’t have.  I might add that I put every stamp you sent me in the book.  I can trade most of my stamps with the Frankfourth family.  Dee F. is my best friend and Vicky F. is Cindys best friend.  Both of them are very nice.  Everyone in their family has a stamp collection.

[Linda note:  I have no memory of Dee EVER being my friend, let alone a best friend.  I remember that she was always the most popular girl in the school from first grade onwards.  I admired her, and I craved her to like me – but I was so in a world of my own, and she was the super-chick, super-clique kind of girl.  I so wanted to be like her that when it was time to learn how to write cursive, I turned my papers all the way to the right so I could write with a left slant like she did.  She was left handed, I was right – but I’ve never been able to correct the slant of my writing in any other way. Dee was a cheerleader, in sports, came from a stable family, was active in school politics, and loved by all.  I did not exist in that world.  Interesting that I would say this here in 6th grade!  Wishful thinking or an ‘imaginary friend’. By the time I was in high school, Dee and her circle of popular friends would talk about their most private ‘group’ concerns in front of me as if I was invisible, as if I wasn’t there, never including me in any conversation.]]

I have started collecting Post Cards.  I have at least 130 post cards.  Mom went through a box of old papers and found some.  She gave them to me, and that’s where most of them came from.  Mom got most of them when you and her traveled.  They sure are interesting and pretty.

I give all of the extra Post Cards to Vicky because she has a Post Card collection but she said she couldn’t get too many of them.

Vanovers had a little black puppy called Duke.  He was very sweet and Vanover’s did not deserve him.  If they wanted him to go home, they would throw rocks at him.  Once July hit Duke with one.  If he wasn’t there when they fed the dogs, he didn’t get fed.  Well, yesterday, about 10:00, a car hit him, and it killed him.

Mrs. Willis had a baby.  It was a girl.  That will be nice for Linda (Her girl).

David is getting bigger all the time.  We weighs about 40 pounds.  He says all kinds of words now including Grandma.  Probably next time you see him, he will be able to talk like us.

P.S.  This letter is late.  I lost it while we were moving, and I found it now.  I’ll write soon on recent news.  Bye-now, Linda

[Linda note:  I see that the remote, robot-writing Linda had no need for an affectionate closing for my grandmother — too bad!  I do like it that I added a small creative touch by finding a green ink pen and writing on the bottom of the flower card “A Summer Evening” and “Hi.”]

[Linda note:  Mother kept both my stamp collection and post cards as payment for the debt I owed her:  *Age 13+ – MY MOTHER’S RIDICULOUS LIST]

[I was about 9 months older when I wrote this letter than my mother was when she wrote her stories:  +MY MOTHER’S CHILDHOOD STORIES] 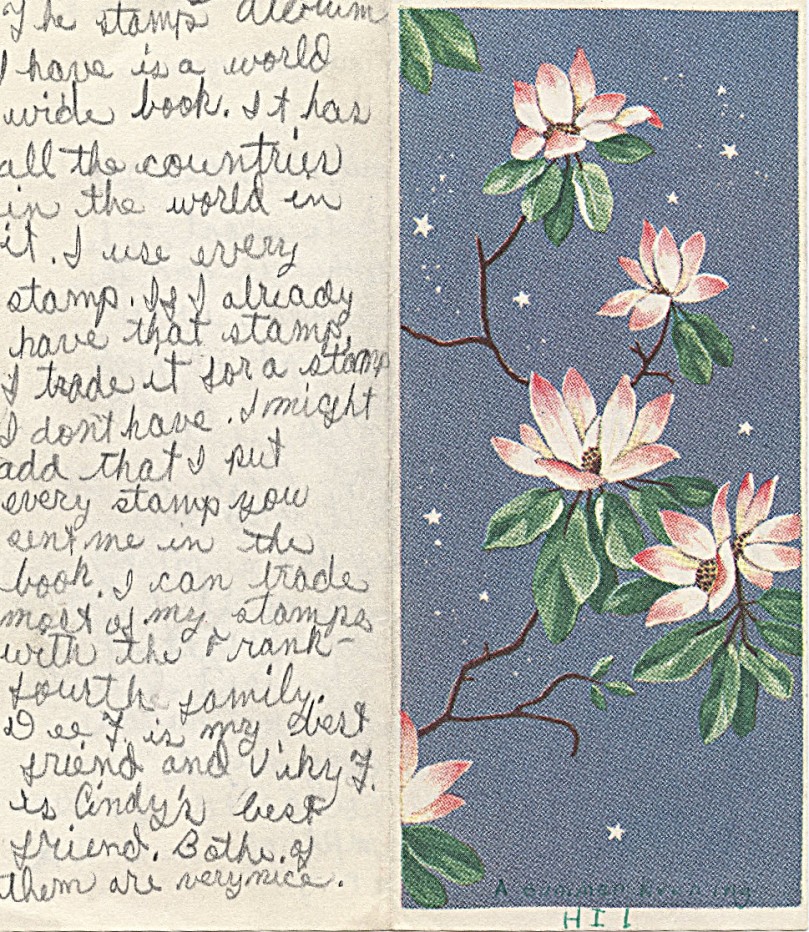 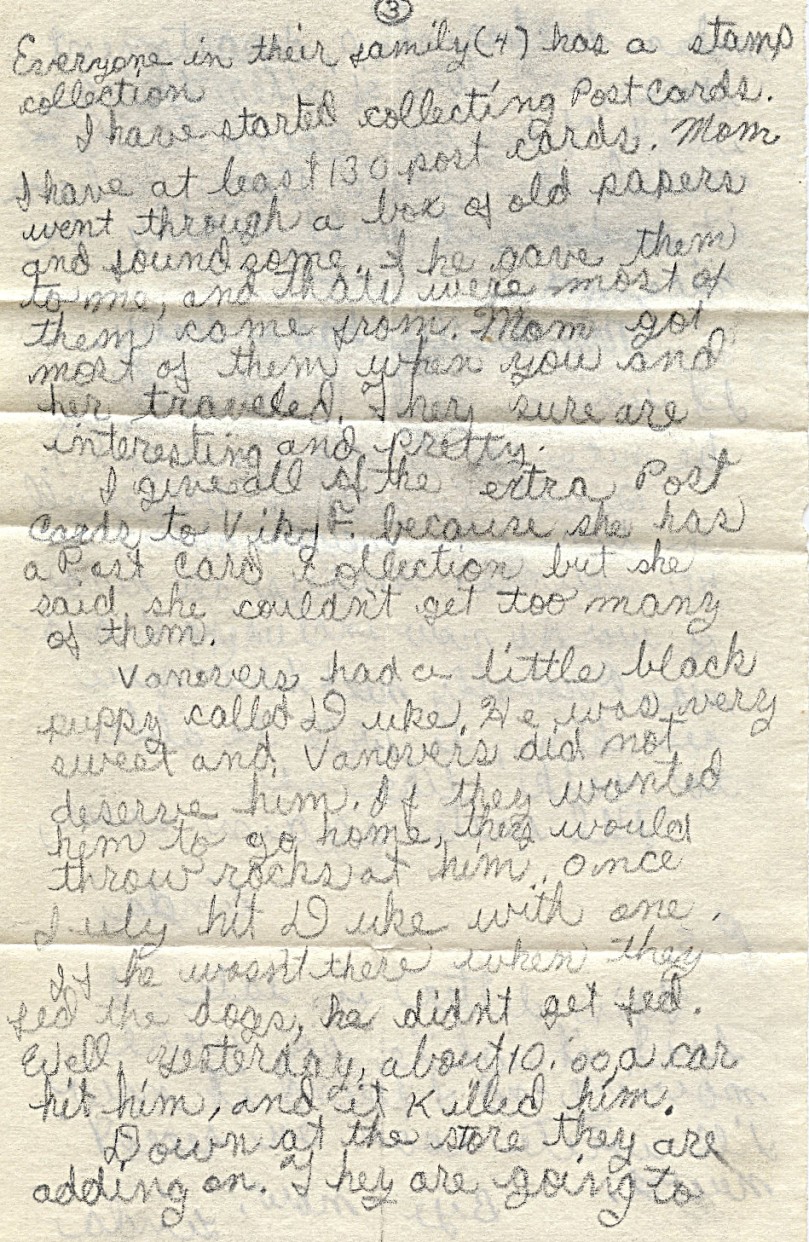